In the early 2000s, Eneclann, the National Library of Ireland and the Origins Network put together the most complete set of Griffith's Valuation ever assembled, digitally imaged it and an accompanying set of valuation maps and made a database transcription of all personal names and placenames. In 2009 the Library Council of Ireland acquired a licence from this consortium for the digital record images and the transcripts (not the maps) and made them searchable for free at AskAboutIreland.ie. The transcripts were linked to a separate set of Valuation maps created between 1870 and 1883. The full early 2000s set, images, transcripts and maps, is now also on FindMyPast.ie. Ancestry.com have a different transcription, without the accompanying maps.

The placenames used in Griffith's are the versions earlier standardised by the Ordnance Survey and used in the 1851 census. The civil parish placenames listing on this site at www.johngrenham.com/places/civil_index.php uses the 1851 Townlands Index to provide click-through access to the AskAboutIreland Griffith's listings for each townland.

The major differences between AskAboutIreland and the commercial transcripts lie in the search interface and the maps. Searching on the free site permits only a very weak surname variant option, no wildcards, and no variant option at all for its placenames search. It is not possible, for example, to combine a personal name and townland name search.

The difference in the links to the Ordnance Survey maps accompanying Griffith's on the two sites is more complex and needs a little explanation. The leftmost column in the printed valuation is headed 'No and Letters of Reference to map'. Each holding within a townland or street is numbered sequentially in order of valuation, not of geographical contiguity. In general, on the accompanying map each townland is surrounded by a thick line, with the numbered subdivisions outlined inside lighter lines. Within these numbered subdivisions in the printed valuation, letters are sometimes included. Capital letters after the subdivision number (e.g. '2A, B ,C') indicate separate parcels of property in the townland held by the same individual. So if a John Kelly leased two separate fields in the townland of Ballymore, these will be listed within the townland under his name following each other as 2 A, B. Lower-case letters after the holding number (e.g. '2a, b ,c') indicate a house situated within a parcel of property. Where a number of houses are situated on a parcel held in common by a number of listed occupiers, a large curly bracket encloses them. This was common in rural areas in early and mid-nineteenth century Ireland, especially in the West, with anything up to 20 families farming an area in common, a cooperative farming arrangement dating from the middle ages and known in Ireland as a clachán. 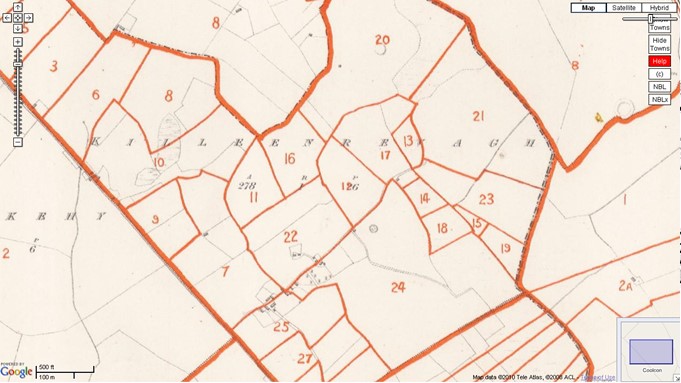 In theory, both online versions of Griffith's allow a user to go from the printed Valuation to the corresponding OS map and thus identify precisely a particular holding. In practice, this is sometimes difficult. The map set used by FindMyPast is more or less contemporaneous with the publication of the Valuation and so corresponds more closely to it, but the maps are often badly worn, with images are in black and white presented very awkwardly. The AskAboutIreland maps are very clean, are in full colour and have been stitched together and overlaid on a contemporary Google map, making them much easier to manipulate and to match to modern roads and villages. But the map set is not contemporary with the printed valuation: it is at least twenty years older, with the result that many of the subdivision boundaries no longer match those recorded in Griffith's.

In addition, the AskAboutIreland collection can include anything up to eight additional maps, accessible through a drop-down list headed 'Map Version' on the right of the initial map displayed. These come from the Valuation Office and were used in the process of revising the original valuation maps. They relate only to the Republic of Ireland. Unfortunately, in the words of the site itself, 'The exact year of revision/publication for each of these versions has not been possible to identify.' Without a year, the maps are almost useless. When the VO revision books themselves become available online, it may be possible to match them with these VO maps. The AskAboutIreland maps also link to a set of the Ordnance Survey Name Books, a large series of studies of local place-lore accumulated by the OS in the process of the standardisation of placenames.