To recap: under the original system, the local Registrars passed completed copies of their registers to their Superintendent Registrar, who made copies and every three months sent these to the central GRO in Dublin, where master indexes were created from them. This index-to-register system is still the basis of almost all research in these records. 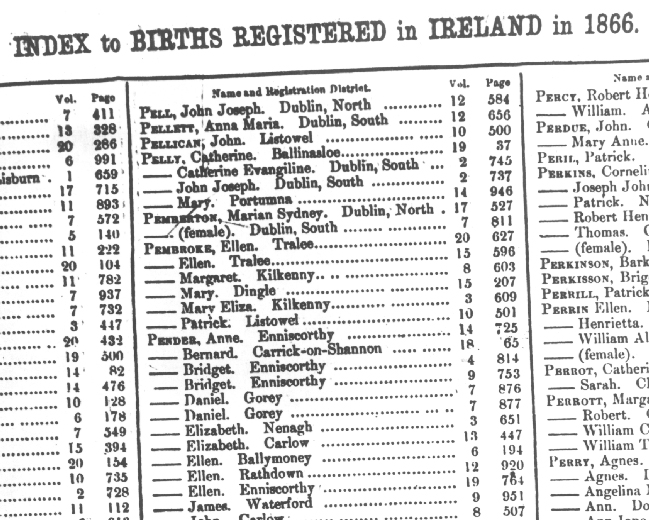 In the Republic of Ireland, the only access to the full set of GRO records, from their beginning in 1845/64 to the present is via the centralised indexes and copy registers available via the research room of the GRO at Werburgh Street, Dublin 2, D08 E277. Researchers pay €2 to search five years of a single-event index, or €20 for a full day's access to all indexes of either births, deaths or marriages. These indexes record surname, forename, registration district, volume and page number. Death indexes also record the reported age at death. From 1900, birth indexes record the mother's maiden name. To see the complete details in an original register transcript entry, a researcher fills out a request form with the details extracted from the index volume, pays €4 and waits for a member of the counter staff to find the entry in the digitised system, print it out and bring it back to the counter. There is a limit of eight print-outs per researcher per day, though members of staff will post on or email any requests above that number. Limited research is carried out by the staff in response to postal queries.

This Health Service Executive website operates an online certificates-only service covering births from 1864, marriages from 1903 and deaths from 1921. The system is designed to produce certificates (costing €20 plus postage) for current administrative use and requires precise dates. Orders are fulfilled from Joyce House, 8-11 Lombard Street East, Dublin 2.

www.IrishGenealogy.ie: A project to image all of the Registrar-General's copy-registers and create fresh indexes to these images began in the Republic in 1995. In 2013 www.IrishGenealogy.ie made the new indexes freely searchable for births more than 100 years old, marriages more than 75 years old and deaths more than 50 years old. In 2016, they followed up by making the linked digital images also freely available. At the time of writing (March 2022), the image-sets are nearly complete, with only death record images before 1871 to be added.

It is hard to overstate the importance of these changes for research. What was a cumbersome, time-consuming and expensive process has become easy, fast and free. There are limitations to the site - see below and Chapter 5 for fuller discussions - but there is no doubt that making the record images free online is the single biggest advance in Irish record access since the destruction of the PRO in 1922.

The Church of Jesus Christ of Latter-Day Saints, the Mormons, have microfilm copies of all the indexes to 1958, of the birth registers 1864-81, 1900-13 and 1933-50, of marriage registers 1845-70 and death registers 1864-70. In addition, they also have microfilm copies of the birth registers 1930-58. These microfilms have long been available for research via the family history centres attached to most Mormon temples (see below). Transcripts from some of the microfilms are free on the main LDS website, www.familysearch.org.. Browse by location to Europe, then Ireland, then 'Ireland, Civil Registration Indexes, 1845-1958'. The 'Advanced Search' option then allows the search to be restricted to the birth, marriage or death indexes, and by period and registration district. The full transcript of the indexes comes up to 1921 for the entire island and to 1958 for the Republic. This obviates the need to search (and pay for) the physical indexes in the GRO Search Room. A part-transcript of the first seventeen years of birth registrations, from 1864 to the first quarter of 1881, is also on the site. Even though it omits precise addresses, occupations and other details, the fact that unlike IrishGenealogy.ie it indexes mothers' maiden names makes it a valuable short-cut to IrishGenealogy's record images. Click here for full details of the LDS holdings.

The LDS have licensed copies of their GRO transcripts to Ancestry.com and FindMyPast.ie.

As part of the Irish Genealogical Project, it was planned that the Irish Family History Foundation network of local heritage centres would transcribe the historic registers still held locally by Superintendent Registrars. For eleven counties (Derry, Donegal, Galway, Kilkenny, Leitrim, Limerick, Mayo, Roscommon, Sligo, Tipperary and Waterford) transcription is substantially complete, up to 1911 or 1920. For Antrim, Armagh Down and Monaghan part-transcripts exist. Most, but not all of the records are searchable at the subscription site www.rootsireland.ie. It should be kept in mind that the records transcribed here are the local originals, without the inevitable layer of error created by centralised transcription and indexing. Again, they can be a valuable supplement to IrishGenealogy.ie.

In Northern Ireland the only access to the full set of GRO records, from their beginning in 1845/64 to the present is via the public search room of GRONI in Colby House, Stranmillis Court in Belfast. Unlike in the Republic, the public has onsite access to full digitised versions of the records. Transcription of the original register entries has taken place, creating a much more flexible research system independent of the old index-to-register search model. For historic records (births over 100 years old, deaths over 50 years old and marriages over 75 years old) access is now via GRONI's pay-per-view website, geni.nidirect.gov.uk. The records on which the site is based are the original local registers held by Superintendent Registrars, not the central copies held by the GRO. More precise research is possible than on IrishGenealogy, with options to search on mother's maiden name and on local registrar's district. It is possible to use these enhanced indexes and then go to the free corresponding image on IrishGenealogy. For images of deaths in the six counties of Northtern Ireland before 1878, GRONI is currently the only online source. The same is true for any events registered after the foundation of the Northern Ireland state in 1921.