All of DCLA's heritage databases brought together behind a single interface, including:

At the outbreak of the First World War, Monica Roberts, a young upper-class woman who lived in Stillorgan, Co. Dublin, set up a 'Band of Helpers to the Soldiers' to provide gifts and comforts to men at the Western Front. This online publication includes The collection contains 453 letters back to her from 56 soldiers.

A collection called "The Burgess Rolls", held by Dublin City Library and Archives, records a very large proportion of the city's population between 1898 and 1918, with a separate volume for each year. Voting rights in municipal elections, it turns out, were hugely expanded long before universal suffrage was introduced for parliamentary elections. A large majority of households in the city are covered. However, in printed format they are almost unusable, subdivided by voter class and voting district into hundreds of unindexed sections. The years 1908 to 1915 are now online. 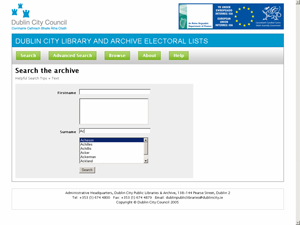 Dublin City Library and Archives have an extremely extensive collection of voters' lists between 1937 and 2004. These can be particularly useful in tracing the movements of families within in the city, year by year. However, until now they have been very awkward to use, requiring a street address and not searchable by surname. As part of the Genealogist-in-Residence programme, I designed the database structure, the functional specification and the SQL, and assisted KCO in implementing a browser-based application using IIS, PHP and MySQL, with a database transcript linked to scans of the original pages. The application was completed in June 2007, and includes 4.1 million records. Since 2007, it has been available in the reading room. The full run is now also searchable online at databases.dublincity.ie.

Again, as part of the Genealogist-in-Residence programme, I produced a database application for users to search the registers of this small Dublin chapel, catering mainly for Welsh-speakers. It is available in Dublin City Library and Archive reading room.

A Microsoft Access application to allow the Library to catalogue its extensive collection of portraits of Church of Ireland clergymen, by subject, medium, artist and period. 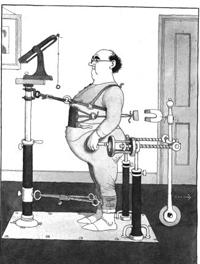 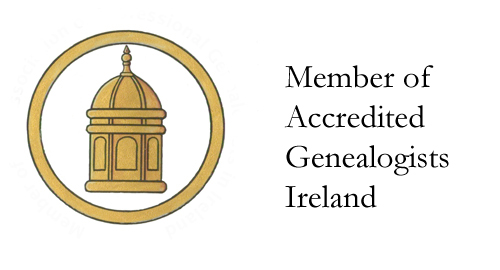